With The Earth Above Me 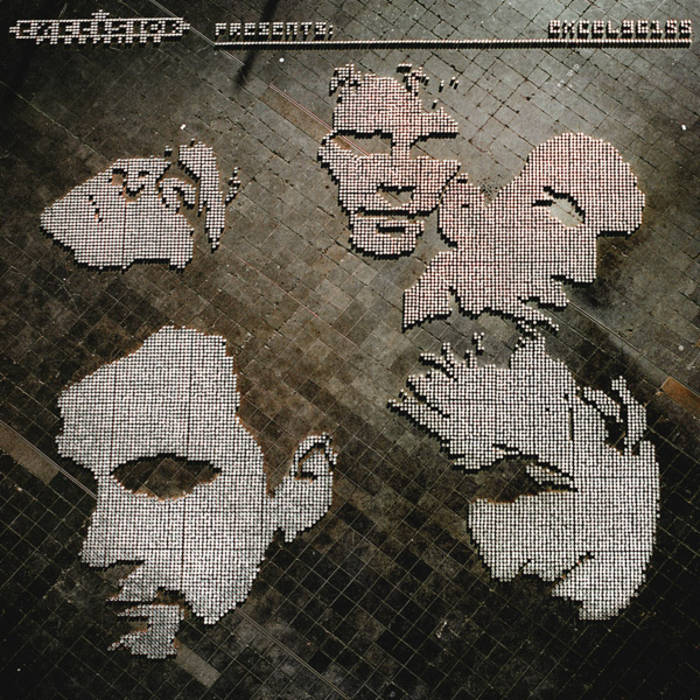 LPG is underground. They rehearse in a basement, make quite weird music (with glorious melodies, one must admit) and called their new, second album very appropriately 'With The Earth Above Me'.

The cover of this album is a Gesamtkunstwerk of 11,000 cans spread out on a square, all by the boys themselves and with a little help from photographer Reyer Boxem. This has all been printed on a beautiful digipack including a poster for the details...

Enough about form, let's focus on the content. This album is a collection of songs about being an observer of your own environment. Being a part of what you criticize. As outsiders, from The Nothern Part of the Netherlands, from where they both do what they like best, and do best; making music.

'With The Earth Above Me' is no straightforward pop-record, so give the songs a few turns, and you will have to admit they deserve it. Probably it will even enrich your life as much as it did theirs during the making of this album.

Track Name: Kiss My Hope
maybe there is hope lay down and admire
come on kiss my hope lay down in our fire
Track Name: Therefore
therefore you want my keys
boredom of life at ease
comeback for everyone
lay down for every dime
where’s your comfort
praise the pre-little one

we got lethargy
and there is no one to set us free this time
Track Name: We Don't Understand
walk down 85
well it seems
you’re so…

this is the sea look up high it’s so bright
people drowning babies dying
car crash plane crash I deny it
people holding hands
it’s just a child on her way home
Track Name: Opera
I’m so happy I could sing an opera
I fit in you singing la la la
one hour ago under that rock
digging in circles I cursed my luck
but that’s over now
Track Name: I Amsterdam
tell me where you stand
attraction of this land
are a bunch of skinny girls
who were meant to be ours
they should have stand here
surrounded by friends
but we’re gonna abuse them
‘cause I Amsterdam

tell me where you stand
and please raise your hands
Track Name: Daylight Human Beings
sunday evening
half past nine
slowly breathing
too much wine
the neighbours went to bed
and turned off the lights
now I can see your face at night

monday morning half past eight
the neighbours went to work
and the crickets lost their faith
drink some more so long farewell
let the people stew in their daylight hell.
Track Name: Billy
Billy’s saving energy with
walking down the alley with his
faith on him
meanwhile the stars
shine and ask him
what they do confusing him with
shouting words

and what do you know about fear
about your losing, having none of you clear
and how do you think you can solve
the problem in which you are involved

you can tell by seeing the pearls in her eyes
rolling down, down her cheeck
trying to pull it together but missing a spot
and her mind doesn’t want to be weak

you can tell by seeing the pearls in her eyes
rolling down, down her cheek
trying to pull it together but missing a spot
and her mind doesn’t want to be weak
and she lives by the record of expectations
and God made that promise about valleys
love love and hills
Track Name: I Don't Belong Here
come on and ask me
ask me I’m happy
later you’re sorry
it’s a blurry you see
there’s no right season
they’re all the same
come on and ask me
convince me with pain

silverscreen hero lovers came to life
what about the crumbs
white cube little worship lovers
you’ve never met a crumb
skin sucking panty fire flies
what about the crumbs
you’re the truth to public answer
you’ve never met a crumb
Track Name: Peter Icon
she gets in with her stinking meal
and she talks too loud
you lift your chin knowing what’s the deal
never let her win
your fingers shake as you cross them tight
whispering in space
the words get louder as you spit them out
“tell me whats the point
no you’ll never change no you’ll never win
I got a load of pride”
the burning pages of the book of sin
Peter at the wall

but you lift your chin never let him
win
you wanna win
Track Name: With The Earth Above Me
there is a hole in the sky it’s a trench I…
I watched the stars and thought they all shone bright
but Peter his old grandfather once said
if you have a dream of a flying flickering light
you’re saved

Bandcamp Daily  your guide to the world of Bandcamp